This CD recording released in 2010 features the piano music of Turkish composer Adnan Saygun, a major figurehead of Turkish music as one of the first composers of Western classical music in Turkey. Complete liner notes are provided below along with links to streaming sample tracks and a performance video. 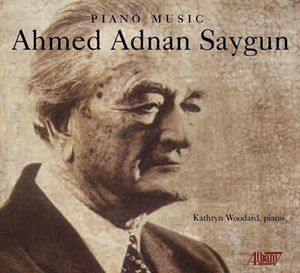 Video of Theme and Variations

“Nothing is pure,” said Enishte Effendi. …“[W]henever a masterpiece is made, whenever a splendid picture makes my eyes water out of joy and causes a chill to run down my spine, I can be certain of the following: Two styles heretofore never brought together have come together to create something new and wondrous. …To God belongs the East and the West. May He protect us from the will of the pure and unadulterated.”

In Orhan Pamuk’s novel set in the late sixteenth century, Enishte Effendi here is responding to the protagonist’s warning against embracing “Frankish techniques” and “methods of Venetian masters” in Ottoman painting as it risks sullying “established traditions” and stripping the culture of its purity. With Enishte Effendi’s comment on the intermingling of painting techniques at this specific point in Ottoman history, Pamuk is at the same time addressing a central theme in Turkish expressive culture of our own time: the need to create a synthesis of East and West in a place that straddles Europe and Asia.

The music of Turkish composer Ahmed Adnan Saygun (1907-1991) is often framed in exactly this manner, as a bridge between East and West. Upheld as a central figure in the musical life of the Turkish Republic, Saygun represents a nationalistic stance based on an embrace of European compositional models combined with an appreciation for Turkish traditional music, particularly folk sources from Anatolia. Saygun is touted as one of the first Turkish composers who wrote “Western music” along with the other composers of the “Turkish Five”: Cemal Reşit Rey, Ulvi Cemal Erkin, Necil Kasim Akses, Hasan Ferid Alnar. However, this status—both as ‘first’ and ‘Western’—does not take into account the long development of Western influence in Turkish music over the course of the nineteenth century—a history of hybridity—nor does it credit Saygun for his ability to create uniquely Turkish piano music.

The piano works on this album cover five decades of Saygun’s compositional output and present a wide range of stylistic approaches. From the “Theme and Variations” of his student days in Paris to the folk dance arrangements in Anadolu’dan (From Anatolia) to the rhythmic and modal complexities of the Etudes, Saygun is continually experimenting with bringing styles together, with bridging different sonic worlds that he inhabits.

The first piece, Theme and Variations, is the last movement from the Suite Op. 2 that Saygun composed while a student at the Schola Cantorum in Paris in 1931. He received a presidential scholarship to study there from 1928 to 1931 and was a composition student of Vincent d’Indy. The scholarship program was intended to offer a European education to the most promising young artists of the Turkish Republic (founded in 1923) with the hope of infusing Turkish artistic life with European models and techniques. Saygun had identified himself as a prime candidate after studying piano and composition with various teachers in Izmir, the Aegean coastal city where he was born in 1907. At the same time Saygun took lessons on the ud, the Middle Eastern lute, and was familiar with makam, the Turkish modal system. At the time of Saygun’s youth in Izmir, cities in the Ottoman Empire had already experienced an influx of Western music, and local musicians could be heard playing not only in Ottoman classical ensembles, but also in established orchestras, as well as in nightclubs or gazinos where popular music was increasingly becoming a hybrid mix of Middle Eastern and Western influences.

The Suite, as Saygun’s first work for solo piano, is his attempt to meld references to Turkish modes with European counterpoint that he was studying in Paris. In fact, the recording presents a reworked version of the Theme and Variations with the opening theme intact but with a few sections rewritten and simplified from Saygun’s overly complex contrapuntal style of his student days. The date of the new version is unknown; the date of publication is given as 1961 in Ankara. The result is a pastiche of stylistic references that contrast sharply with one another and often without transitions. The title of the piece is questionable as the form is closer to that of ritornello rather than a set of variations on a theme. However, rather than label the title a mistake, and his sudden shifts in style a compositional shortcoming, I prefer to view the work as Saygun’s challenge to the listener to rethink aesthetic expectations from a composer who represents a place that so readily shifts between cultural and sonic references. It is these kinds of shifts, juxtapositions and hybrid techniques that inform all of Saygun’s music, including the other works on the album.

With Inci’nin Kitabı, Op. 10 (Inci’s Book) Saygun turned to the task of composing pieces for children. The set of seven pieces was written in 1934 the same year that Saygun had two operas premiered, Özsoy and Taşbebek. The simplicity of texture and technique needed for Inci’s Book allowed Saygun to crystallize his approach to using modes from Turkish music. In some cases there even seems to be overlap between references to makam and to church modes that Saygun would have learned at the Schola Cantorum, pointing possibly to an understanding that the modal practices are linked by older musical ancestry.  Are the simple ornamented lines of “Masal” to be heard as Phrygian mode or Kürdi makam, or some combined reference to ancient Phrygia in central Anatolia? Adding to Saygun’s unique approach is his choice of accompanimental patterns that sometimes enhance but just as often cloak the references to makam and mode (for example, “Kocaman Bebek” in D Dorian, or Hüseyni, but over C pedal tones for the second phrase). In the case of “Rüya” the pitch content of the karcığar makam with its lowered fifth in the melody combined with the undulating chromatic line in the middle voice conjure up a kind of Turkish blues, reminiscent of George Gershwin’s Second Prelude. Saygun has set the stage for future explorations of makam within a harmonic texture.

Two years after composing Inci’s Book, Saygun worked closely with Bela Bartok as the composer’s assistant during his trip to Turkey in 1936. Bartok was only in the country a few short weeks, performing his music, offering lectures about composition and fieldwork, and conducting fieldwork in the south of Turkey, but the exchange left a lasting impression on Saygun. His set of three pieces Anadolu’dan (From Anatolia) from 1945 is clearly indebted to Bartok’s methods for utilizing folk music in composition. Saygun chose three folk dances from different regions of Anatolia to arrange as piano pieces: a Meşeli from the Sakarya region in the northwest, a Zeybek from the central Aegean coastal region, and a Halay from Sivas in the northeast. Each arrangement offers radically different approaches to setting the tunes. In “Meşeli” Saygun establishes a rhythmic ostinato to substitute for the drums that would articulate the 9/8 irregular meter of the dance as 2+2+2+3. The shifting quartal harmonies of the ostinato accompany the dance melody, which is in karcığar makam in the piano’s equal temperament.  “Zeybek” is striking in its use of primary chords to harmonize the melody, but as the original melody fits the B-flat major scale (mahur or rast makam), Saygun chose to keep a straightforward accompaniment. This dance also calls for a 2+2+2+3 division of 9, but at a much more majestic pace. The halay dance is found throughout Turkey, but the four sections of this piece point to an origin in the east (other halays have only three sections), and Saygun also set parts of the same melody as a song for Baritone and piano where he specifies the Sivas region in the title. The dance opens with a two-voice, polymodal setting of the first melody in stark contrast to the major key and primary chords of the “Zeybek.” The contrast brings home the point made for the Theme and Variations: Saygun is not after stylistic unity, either within or between movements, but rather is willing to work with any stylistic device available to him as befits the needs of the melody or compositional context. He reiterates this point as he winds through different settings for each section of “Halay.”

Following Anadolu’dan Saygun waited almost twenty years before returning to write for solo piano. His next three works are larger cycles of pieces based on ‘aksak’ rhythms: Ten Etudes, Twelve Preludes and Ten Sketches. ‘Aksak’ is Turkish for ‘limping’ and is a general theoretical term to refer to the irregular meters that are found both in Anatolian folk music and Ottoman art music. The Ten Etudes on Aksak Rhythms, Op. 38 were composed in 1964 and have become a rite of passage for serious piano students in Turkey. With this set Saygun moves in a new direction for his piano writing, not only because of the technical demands of the pieces, but also for their more abstract references to Turkish music. In Etude No. 3 Saygun returns to the dense, contrapuntal writing of his student days and crafts a fugue out of a winding, makam-like melody. The opening of Etude No. 4 is evocative of Debussy’s orchestral Nocturne, “Nuages.” After the slow ‘aksak’ meter is established through undulating dyads, an improvisatory melody enters and weaves through the accompaniment in polymodal contrast. Etude No. 5 is the most dance-like with its emphasis on maintaining the literal limp of the 5-beat ‘aksak’: 2+3. As such it is reminiscent of the Dances on Bulgarian Rhythms by Bartok. Etude No. 7 explores the range of the piano as a through-composed piece, with its formal freedom pointing in the direction of the later set of Sketches. Etude No. 10 provides a satisfying end to the cycle with its virtuosity and driving, complex ‘aksak’ meter of 3+3+4. The opening chromatic lines in the bass keep the timbre murky and make it difficult to ascertain the pulse. Even after the left hand settles on an ostinato, the melody line is kept abstract and shifting, creating a kind of rhythmic counterpoint in ‘aksak’ meters. In essence Saygun takes the building blocks of makam and aksak meters and creates a pendulous swing between abstract and concrete references to Turkish music in the Etudes.

In his final set of pieces based on ‘aksak’ meters, the Ten Sketches, Op. 58 from 1976, Saygun continues the approach of the Etudes but aims for a more improvisatory sound in mostly through-composed forms. In some cases (Nos. 2, 7, 9, for example) it sounds as if he sat down at the piano and decided to improvise in the manner of ‘taksim’—the explorations of makam that are a feature of Ottoman art music—but using all of the piano techniques that he devised and explored over the years. Sketch No. 1 presents a stark contrast to the Theme and Variations where it is positioned on the CD, but this opening passage of open fifths is actually a clear reference to another folk dance that Saygun studied in his fieldwork, the Black Sea horon, a virtuosic 7-beat dance performed in double and triple stops on the Black Sea kemence, a small bowed fiddle held upright. The piece quickly moves beyond the overt horon reference to explore the full range of the keyboard and more complex sonorities, and so, even in this case the folk source seems to provide merely an impulse for further improvisation. There are also occasional references to makams throughout the Sketches but they are fleeting and interspersed between other modal constructs such as whole-tone, octatonic and pentatonic passages that contribute to Saygun’s richly varied compositional language.

March 25, 2023: University of Hawaii-Manoa Bands at Ala Moana Marketplace

Victory March for Concert Band is available for sale as a digital download. Learn more about composer Leyla Saz on the Research page

Listen to new compositions by Kathryn Woodard. They can be purchased from SheetMusicPlus.